Ant Agony
Bandicoot Pursuit is the eleventh and penultimate level in Crash Twinsanity, as well as being the second stage on Twinsanity Island and the second and last doc amok level, where Crash must save Cortex from Evil Crash.

Crash must use the machines in the level to guide Cortex to safety as he runs from Evil Crash. The level splits in two at the large machine. At the end of the Doc Amok sequence, Cortex teleports to the entrance to Ant Agony and Crash can collect the other gems before going to the door to the next level. There is also a portal device that teleports Crash and the other characters back to Cortex's Iceberg Lab to repeat the past levels again.

Green gem: The green gem is at the end of the first segment of the Doc Amok sequence. Make sure to disarm the traps for Cortex first, then jump down to a ledge below the button to grab the gem.

Blue gem: The blue gem is about halfway through the second segment of the Doc Amok sequence. There is a landmass that you must run along, towards the camera at a certain point to reach the gem.

Purple gem: When the Doc Amok sequence ends, go behind the rocks on the right. The purple gem is hidden behind there.

Clear gem: Once you reach the beach area after the Doc Amok sequence, climb up and do the ball puzzle straight ahead to deactivate the forcefield surrounding the gem. You must hit a ! crate hidden behind the land mass the puzzle rests on to make a platform appear that enables you to jump over to the gem.

Yellow gem: To the left of the stronghold, there are a few bouncy crates. Bounce on them to hit a ! crate. This activates another bouncy crate back near the tunnel from the Doc Amok, behind the rocks to the right of the hole. Bounce on this crate to reach the yellow gem.

Red gem: The intended method to get this gem is to jump on the ! crate in the middle of the 4 nitro pillars, which makes a metal crate platform appear in the nearby body of water. You must then use this to jump over and reach the energon sphere resting on a platform there, then spin or slide it over to the nitro pillars to blow them up and allow you to jump up there to reach the gem. 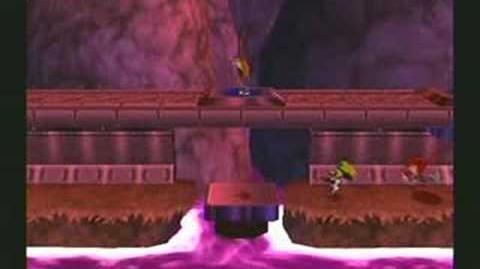 "Let her go, take me instead!" 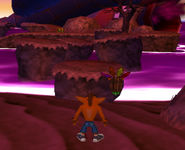 Entrance to the Doc Amok