Warped, The Wrath of Cortex, and The Huge Adventure

In these games, balloons are found in flying levels, where they are attached to crates and hold the crates in the air. A few of them are health balloons. The health balloons are white with a red cross on them. Breaking a health balloon adds to Crash or Coco's health, with the amount added depending on the game, although health can never go above 100%. Additionally, the stopwatch to start time trial mode is attached to a balloon.

In Crash Bash, they are the items that players must pop in the Ring Ding minigame in order to score points. A player pops a balloon by pressing

to jump into it.

The majority of balloons in Ring Ding are colored yellow, red, blue, or green. If a player pops a balloon of his/her own color, the player will score one point. The colors are the same as those for coloring squares in Pogo Pandemonium minigames, and are as follows:

The other balloons in the arena are black. Any player can pop these. When a black balloon is popped, one of the following happens.

Each of the above possibilities happens roughly one third of the time. Although the player does not get an advantage when the ring's direction is changed, and as a result will have wasted time by popping the balloon when that happens, it is still worthwhile to pop the black balloon because of the other possibilities that can occur.

A blue balloon from Crash Bash.

A green balloon from Crash Bash.

A red balloon from Crash Bash.

A yellow balloon from Crash Bash. 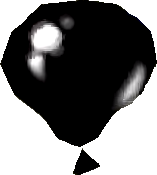 A black balloon from Crash Bash.