Crash and Burn
Atmospheric Pressure is the fourth and penultimate boss level in Crash Bandicoot: The Wrath Of Cortex and is also the last Elemental battle before Crash can fight with Dr. Neo Cortex in the space hub. After Crash has collected all of the crystals from the air hub of Coco's VR Hub System, he will be allowed to battle Crunch who is partnered with the Air Elemental, Lo-Lo. Up until this point, all of the boss battles have taken place on solid ground, but this time, Crash and Crunch take the arena up to the skies. As opposed to the other three Elemental battles and the final confrontation, there are no phases, so this is the only battle that is straightforward attacking Crunch, with the help of Crash's glider, while dodging Crunch's attacks. After Crunch's health is emptied out, Crunch's genie-like body explodes violently and Lo-Lo is once again trapped in hibernation alongside the last three Elementals before him. The duo leave nothing else behind but the Fruit Bazooka ability. 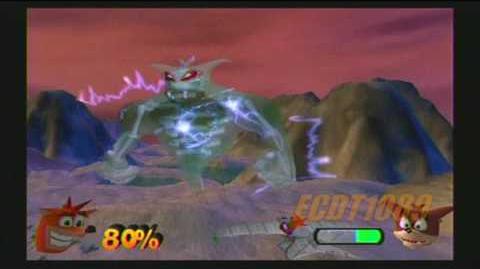 The airplane as seen in the beta.