The Atlasphere is a ball that Crash Bandicoot rolls around in various games. It first appeared in Crash Bandicoot: The Wrath of Cortex; it is used on five of the levels, and one is a boss fight level: Bamboozled, Rumble in the Roks (Boss), Eskimo Roll, Medieval Madness and Solar Bowler. It is also used in Crash Bandicoot 2: N-Tranced by Crash and Crunch Bandicoot in three levels: Globe Trottin', Barrel Roll and Rocks Can Roll.

In N-Tranced's multiplayer mode Coco Bandicoot, Doctor Neo Cortex, Doctor N. Gin, Tiny Tiger, Dingodile, Mega-Mix, Doctor Nefarious Tropy, and N. Trance can use it too. The player can move it by rolling around in the desired direction. In Crash Boom Bang!, it appears in certain mini-games. 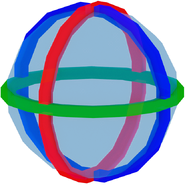 The Atlasphere in Crash Bandicoot: The Wrath of Cortex.

The Atlasphere in Eskimo Roll.

Concept art of Crash using an atlasphere.
Add a photo to this gallery