Android Alley
Assembly Lane (モクモク くみたてこうじょう lit. Ongoing Assembly Factory in Japanese) is the tenth race course that appears in Crash Nitro Kart. This is the first race track in Teknee and takes place in a polluted factory. It has mud to slow down racers, like Tiny Arena. The track's name is a play on the phrase "assembly line". It is used in the Wumpa Cup and the Red Gem Cup (along with Inferno Island and Meteor Gorge).

The factory includes an outdoor part with oil spills and sharp turns. The interior part of this track includes giant hills and machinery that will crush other racers if they don't take precautions. The level initially starts off in the exterior portion of the factory. The racers will encounter a few sharp turns with oils spills. If a racer drives in the oils spills, then they will lose traction and speed. Afterwards, they will come across a few small hills and an activation crate. The activation crate will switch the direction of the giant magnetic device that appears ahead. The racers will then enter the interior portion of the track, which contains a route with a conveyor belt and giant machinery, and a normal route. If a character is squished by one of the machines, then they will lose time and some wumpa fruit. The final portion of the track takes the racers on a giant pipe that contains item crates and speed pads. Before the finish line, the characters will come across a giant oil pit. 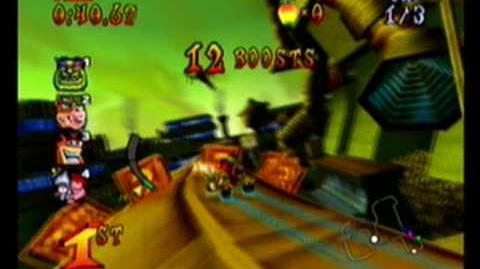 Loading screen artwork.
Add a photo to this gallery

Concept art.
Add a photo to this gallery