View source
watch 01:54
Arcane: League of Legends - The Loop
Do you like this video?
Play Sound

They are based on the Armadillo enemies from Crash Bandicoot 2: Cortex Strikes Back. They live together in a cottage in the forest, and seem to be on good terms with Aku Aku.

The Arumas first appear in the second chapter, Reunion with Aku Aku. Aku Aku is working with the Arumas to help track down a thief that had been terrorising the area. Crash mentions that he is looking for power stones, which Mama recognises. Before she can tell him any information, Crash lets it slip that he is working for Neo Cortex. The Arumas are shocked and outraged at this, and promptly chase Crash and Aku Aku out of their home.

The Arumas show up again later in the chapter when a thief runs by, being chased by Mama and Papa, having kidnapped Aru. The thief snatches an apple out of Crash's hand on the way, prompting him to angrily give chase. He knocks the thief to the ground and tries to snatch the apple out of his hands, only to grab Aru instead. Crash carelessly tosses Aru aside and grabs the apple, allowing the thief to snatch up Aru once again as Mama, Papa and Aku Aku catch up. The thief reveals himself to be Anachuur, and demands that the Arumas give him a power stone in return for Aru's safety.

Crash immediately gets distracted by Anachuur's discarded scarf, tying it around his neck like a cape, calling himself "SupaMan" and dancing around. Crash's cape gets caught on a tree branch, jolting him and making him drop his apple, which begins to roll towards an open chasm. Crash tears himself free of the branch and bolts towards the apple, violently shoving Anachuur out of the way, making him drop Aru. Mama and Papa tearfully reunite with their baby as Crash tumbles down into the chasm.

After Aku Aku fishes Crash out of the chasm, the Arumas shower Crash with thanks and praise for saving their son. The bandicoot is confused at first, but quickly soaks up the applause. Papa then hands Crash a map that will lead him to the location of the next power stone, and wishes him good luck on his journey.

Aru is a baby armadillo who lives with his parents. Given that he is only a baby, he is very small and weak, and doesn't seem able to speak aside from saying "Mama" and "Papa".

Aru is a tiny baby armadillo. He has a small round body, short stubby legs, long ears, a hard shell and a short tail. Due to the manga being printed in black and white, his colouration is unknown.

Mama is, as her nickname suggests, Aru's mother, as well as Papa's partner. Her real name is unknown. She is rather kind and gentle most of the time, even a little shy, but when her son is kidnapped and when Crash mentions working with Cortex, she shows a more aggressive and violent side.

Mama is an anthropomorphic armadillo. She has longer, more wavy ears than her son and partner, as well as long eyelashes. She wears a small apron tied around her waist. Due to the manga being printed in black and white, her colouration is unknown.

Somebody catch that man!! He kidnapped our son!!

Papa, as his nickname suggests, is Aru's father and Mama's partner. His real name is unknown. His personality is largely similar to Mama's, if a bit more confident and friendly.

Papa is an anthropomorphic armadillo. He has thick black eyebrows and wears a necktie, and has a darker shell than his son and partner. In one panel only, he is inexplicably wearing a military helmet. Due to the manga being printed in black and white, his colouration is unknown.

The Arumas on the title page of volume 1, chapter 2. 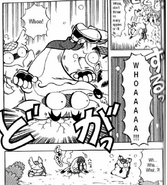 Crash dropping in on the Aruma family.

Mama and Papa chasing Crash and Aku Aku out of their home.
Community content is available under CC-BY-SA unless otherwise noted.
Advertisement