Bandipedia
Register
Don't have an account?
Sign In
Advertisement
in: Machines, Crash of the Titans, Titans,
and 6 more
English

Nina Cortex's personal suit of mech armor, armed with every evil weapon in her private arsenal and some new ones she borrowed from her uncle.

The Arachnina is Nina Cortex's spider titan mech suit and the final boss of Crash of the Titans. Featuring in Episode 20: Revengeance 2: The Revengicide, Crash jacks it to destroy Nina's Doominator robot and save Wumpa Island from total destruction.

In the Game Boy Advance version of Crash of the Titans, it is not the final boss. In the mobile version, its design was changed. Nina uses it to escape after stealing the second mask, but Crash destroys it.

Arachnina is the largest titan in the game. Its head, shoulders, hands, pelvis, and lower legs are metallic, while its arms and chest are covered in brown hair. Its head is hollow so that Nina (or Crash) can sit inside and operate it. The Arachnina has ten limbs in total: its right arm is a large metal claw, and its left is equipped with a detachable buzzsaw. On its back are six metal spider-leg appendages which it utilizes for its Robotomize attack. For this, it assumes a more traditionally spider-like form; the spider legs let it move faster.

Spidey Combo: Arachnina's light attack. It swings either arm at an enemy up to two times.

Heavy Attack: Arachnina rolls its buzzsaw straight at an enemy, which then returns. This attack can be charged for greater damage. In Crash of the Titans (GBA), this is its only attack.

Robotomize: The Arachnina drops to a six-legged position, firing laser beams from its eyes for ten seconds. Any enemy hit with the beam takes damage and is pushed in the opposite direction of where they're facing. While jacked by Crash, the Arachnina can walk around while using this attack; Nina will never do this on her own.

Block: Arachnina guards its face with its arms. This block protects against any attack in the game. 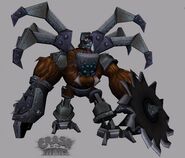 Crash of the Titans
Español Français Português Português do Brasil
Community content is available under CC-BY-SA unless otherwise noted.
Advertisement