Apo-Apo was introduced in Crash Team Racing Nitro-Fueled as an invincibility mask item as part of the Rustland Grand Prix. He protects those racing on the Megamix Mania track as well as racers wearing Rustland themed skins regardless of which mask they are allied with normally. He will also appear during the podium animations for the characters wearing Rustland skins.

Next to nothing is known about Apo-Apo's character given his lack of spoken voice lines and unexplained origins. He's very aggressive, with the only sounds he makes being feral growls and snarls. He does seem to have a small light-hearted side however, as he twirls around playfully during some of the Rustland skins' victory animations.

He is a living magic mask similar to Aku Aku and Uka Uka, though it is unknown if he is a reincarnated spirit like them, nor what (if any) relation he has to them.

Apo-Apo is a brown wooden mask with glowing pure yellow eyes and dull grey metal armor that features nine spikes, two on each side and five at the top along with metal teeth, and three green feathers on each side of his face. There is also what appears to be spots of rust on his armor.

Apo-Apo on the title screen during the Rustland Grand Prix 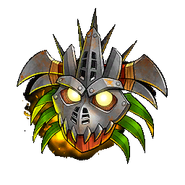 Apo-Apo seen in the render of the Rustland Grand Prix's new skins.

Concept art of the graffiti art seen around Megamix Mania, including one of Apo-Apo.