Charging, slashing, breathing fire, throwing bombs, shooting lasers
The Ant Drones are robotic enemies in Crash Twinsanity, led by the Evil Twins that reside on Twinsanity Island, specifically in the twins' compound. They are the main enemies of the game. Similarly to the original Lab Assistants, they can come in several slightly-altered varieties.

Normal Ant Drones have no means of protecting themselves other than hand-to-hand combat. They attack by charging at the player and usually attack in groups of three or more. They are garbed in blue armor like the Ant Drone Soldier. They first appear along with them arriving on N. Sanity Island using a portal from Twinsanity Island and a large drill in the level Cavern Catastrophe after Crash and Cortex's first rollerbrawl. They show up to take crates into their drill in order to steal enough Wumpa Fruit to power the Evil Twins' Vice-Versa Reversa Device. They later appear in Cortex's airship on Crash and Cortex's way to the Academy of Evil, before their escape from the academy and later in Ant Agony, where they are shown to be capable of grabbing and throwing explosive spheres. It only takes one spin or slide attack to kill Normal Ants.

Ant Drone Soldiers are the toughest and most abundant Ants in Crash Twinsanity. They are garbed in blue armor and are equipped with a short plasma sword that shocks players when attacked. The plasma sword is similar to a lightsaber. The Soldier Ants attack using vertical slashing motions towards the player. They appear in at least every hub world in the game. They also appear during Rock-Slide Rumble on the rocks next to drills similar to the one in Cavern Catastrophe. Because of their toughness, abundance, and aggressive nature, they are considered the main force in the Evil Twins' army of Ants. Ant Drone Soldiers also assist the Twins during the final battle. It takes two hits to kill an Ant Drone Soldier with the spin attack.

These special Ants have light brown armor resembling rocks and a drill on their head. The Ant Drone Drillers attack in groups and by chasing the player on foot and attacking them with their drill, or by digging into the ground like a mole and popping up where the player is to attempt to drill them. They are first seen at the end of Rockslide Rumble in the cave and are later seen in Ant Agony, in the caves inside the stronghold filled with lava. It takes two hits to kill Drill Ants.

Ant Drone Flyers have jet packs on their backs that allows them to fly through the air. They turn on their jet pack once their target comes near and proceed to shoot energy bombs at them. Since the Ant Drone Flyer goes high up in the air to shoot, it can only be defeated once it goes back down, and takes two hits to defeat.

The Ants already existed as minions of the Evil Twins in the Evolution phase of the game's development. Their backstory was that they were members of a race of normally gentle giant ants that were enslaved and genetically enhanced by the Twins to serve as their soldiers.[1] Its uncertain if this was still supposed to be their backstory in the final game where their origin is not explained.

These ants had visible bulbous brains and would throw flasks at the player, similar to the lab assistants in Crash Bandicoot. They were nearly complete by the time Twinsanity released and were planned to make an appearance in Ant Agony, but were cut due to time restraints.[2]

Originally, in Evolution, the ants were going to come in three different sizes. While the small ants did make it into the final game, their design, along with all the other ants, was originally different; they had four arms and their mouths were vent-like instead of their teeth showing. Some of the small ants would be also be riding vehicles called "Mite Mechs" that Crash could take control of by knocking off the driver.[2] According to concept art, regular mites would also have been used by the Ants.

The middle-sized variety of ants.[2] They were more muscular and much larger than the small ants and could apparently give orders to the smaller ones. 3D concept models of them can be seen in Twinsanity's unseen gallery.

The largest of the ants that were said to be massive. They were fully animated and modeled but only concept art of them exists. They appeared in a stealth section in a prototype "spaceport" level, where they would be situated in the middle of a room on a pillar, turning 90 degrees every few seconds while Crash had to avoid their gaze.[2]

In On the Run!, there is a new variety of Ant Drone known as the Mutagen Ant. These ants are less humanoid and much more ant-like in design, and attack by throwing balls of energy at the player, which change depending on the ant's element. They must be fought as well as other henchmen in a gang before the boss itself can be fought. Like all henchmen, Ant Drones are defeated by simply avoiding obstacles to reach them and using the Portal Weapons crafted beforehand to send them back to their own dimension.

"Invented by Dr. Neo Cortex, these robotic insectoids are a formidable pest. Their Nitro, Frosty and Inferno mutations have infested the whole of Twinsanity Island."

Ants in a greyscale 10th Dimension

An Ant Drone as seen in Twinsanity

Ant Drones on a concept for Twinsanity boxart

Mutagen Ant Drones in On the Run! 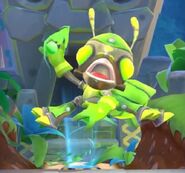 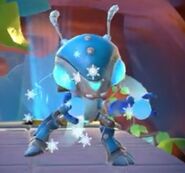 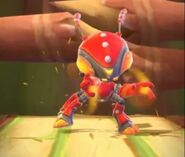 Concept art of the Ant Drones