This track is the second race track in Teknee, taking place in a futuristic city. It is also where the boss race against Geary, Teknee's champion, takes place, and is generally considered to be his home track.

It is used in the Aku Cup and the Purple Gem Cup (along with Tiny Temple and Thunder Struck). In Nitro-Fueled, its aesthetic was changed from a poluted hostile-looking futuristic city to a clean futuristic metropolis.

Android Alley is a long, quite twisty course. The track has some sharp turns and obstacles.

Android Alley begins with the racers outside a tunnel with circle shaped lights, green walls you can drive on and railway tracks. After the racers start, they must avoid the blue train that comes down the tracks, or else they will be squished and lose time and their place in the race. Then they will drop down and head along a 180 degree turn with robotic roads and bridges above, with street lights on the left. Then they go up onto a blue magnetic track via a speed pad which is quite steep and will slow the karts down. Racers can prevent slowing down by boosting, either with power slides or power-ups.

After the steep climb there will be a left turn onto non-magnetic ground again. The racers have to go on 2 bumps which will slow them down if they don't boost. Then they go right past the Manhattan-like section with neon signs and into a tunnel with a sharp right turn, which also requires boosting. After exiting the tunnel, there will be a building which has an entrance covered in glass. It can only be driven through with a very powerful speed boost.

The track goes left and along a sharp right turn into robots. The robots are Geary's minions and they will spin your kart out if you run into them. After the robots, the track has steep climbs and there will be buildings and roads above, as well as a strange-balloon like contraption in the sky. You will drive high in the sky, passing many buildings and electronic signs. You can also see the lifts that go to and from the hub world. Finally, the track ends with a huge climb and a big drop down onto the part with the railway tracks again. Be careful of the train and the racers will cross the finish line. Speed pads are very useful in this track.

The only shortcut is through a building about two thirds of the way down the track, after the tunnel. There will be glass with a V on it and racers can drive through, smash the glass and then get back on the train. Unfortunately, the shortcut can only be accessed with a very powerful speed boost. There is nothing inside. Be warned that racers who don't speed boost will hit the building and fall into the sky, and then lose some time. The shortcut is very useful as it avoids the sharp turns.

The Train - At the start of the track, there will be railway tracks in the center of the course. There is a train that runs on the track and it follows a loop around the robotic city of Android Alley. If the racers are on the railway tracks when the train is coming, they will be squished, lose Wumpa Fruit, and cannot move for a brief time. However, because there are walls along the sides of the tunnel the train goes through, it is pretty easy to avoid, and the tunnel is the only difficult part of Android Alley. In Crash Team Racing Nitro-Fueled, a mask powerup does not protect the player from the train, but a power shield does. Also, in Crash Team Racing Nitro-Fueled, it takes 2.5 seconds for the train to pass through a particular location, and then about another 15 seconds for the head of the train to reach that same location again.

The Robots - 3/4ths of the way through the track, after the sharp turns and building shortcut, there will be small robots who will block your way. They go round in circles ALL the time and if they hit racers, or racers hit one, they will spin out and lose some Wumpa Fruit. The robots go quite fast but with enough practice you can avoid them. They happen to be Geary, the Champion of Teknee's, minions. Racers must time the robots while driving past them as it is easy to spin out. 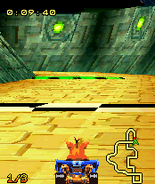 Android Alley in the N-Gage version of Crash Nitro Kart 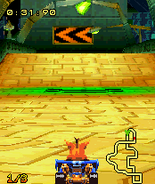 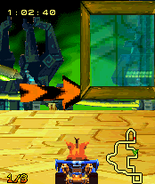 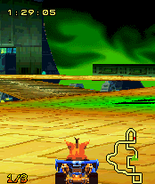 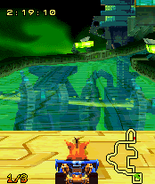 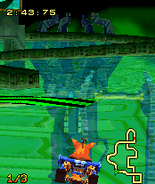