Can't wait for the green light!

Ami is a female Bandicoot that appears in Crash Team Racing and its remake, Crash Team Racing Nitro-Fueled. She is named after Ami Matsumura-Blair, who was the marketing manager for Sony Computer Entertainment America at the time. The other trophy girls were also named after the people that were involved in the Naughty Dog games.

Ami is responsible for handing out prizes to Tiny Tiger, Dingodile, Ripper Roo, Papu Papu, Komodo Joe, Pinstripe Potoroo, Fake Crash, Doctor Nefarious Tropy and Penta Penguin. The epilogue of the game states that she became a race kart driver herself, saying, "I'm sick of giving out trophies! I want a few of my own!"

Ami appears as a playable character in Crash Team Racing Nitro-Fueled, as part of the post-launch Nitro Tour Grand Prix. She is a Speed class racer, like some of the characters she handed out prizes to in the original CTR.

Possibly because of her playability, Ami and the rest of the Trophy Girls no longer hand out prizes at the end of races.

Although little of her character is explored, Ami is by far the most aggressive member of the Nitro Squad. She is very physically active, constantly flexing her arms and performing backflips on the victory podium, implying a deep obsession with her muscles. She is a tomboy, which is even reflected in her original Crash Team Racing epilogue. She also hates losing, as she would sulk while crossing her arms. Despite this, Ami does have a small feminine side, as her Circus skin shows her posing around with an umbrella, calling back to her first appearence.

Ami has short, wavy bright green hair and tail and green eyes. Her attire consists of a yellow and green minidress/tankini and sneakers. She is often seen carrying a large yellow and green-striped umbrella.

In CTR Nitro-Fueled, Ami was the Nitro Squad member with the most alterations to her design. Her eyes are considerably smaller, her hair is now styled into a bob cut and she now has lipstick and yellow eyeshadow. Her minidress now has a yellow checkerboard pattern on her hips and like Liz, she now wears dark green leggings with yellow stripes.

In Nitro-Fueled, Ami joins a racing team formed by Tawna known as the "Nitro Squad" along with fellow former trophy girls Megumi, Liz and Isabella. They were all introduced as playable together in the Nitro Tour Grand Prix, and are often seen racing together in promotional images, implying friendship and camaraderie amongst the group. 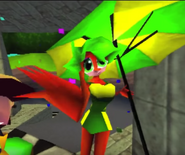 Nitro Pirate concept art.
Add a photo to this gallery

Retrieved from "https://crashbandicoot.fandom.com/wiki/Ami?oldid=191432"
Community content is available under CC-BY-SA unless otherwise noted.