For the location from Crash: Mind Over Mutant, see Evil Public School.

Twinsanity Island
Madame Amberley's Academy of Evil is a school for evil children run by Madame Amberley, and is also the third hub world in Crash Twinsanity. As revealed in Twinsanity, Dr. Cortex had attended this school, as well as N. Gin and N. Brio according to concept art, under the ever-watchful eye of the large Madame. Nina, Cortex's niece, learned her evil ways in this school, just like her uncle did many years ago.

A dark mist surrounds the Academy at all times. It is located on a small island (somewhat akin to an island prison), not too far from the Wumpa archipelago.

The main area of the hub is a large open courtyard with two large buildings on either side, the gaps closed by fences and walls. A purple vintage car is parked near the front gate, presumably Amberley's. A fountain adorns the center of the courtyard, with the entrance to Boiler Room Doom hidden underneath. A few soccer balls can be found around the courtyard, as well as several crate puzzles to earn gems. Through a doorway up the back is a smaller courtyard where the exit to Boiler Room Doom is, as well as a green door that leads to Classroom Chaos that opens after Boiler Room Doom is completed.

After Rooftop Rampage and the Madame Amberley boss fight, Crash ends up on the rooftop of one of the buildings, where Cortex's airship, the way back to the Iceberg Lab, can be found. On the other side of the roof is a floating platform that goes back down to the ground.

Blue gem: Roll, spin or slide a soccer ball near the vintage car into a nearby stack of Nitro Crates, activating the ! Crate on top. This turns the Outline Crate floating above the car into a Bounce Crate. Jump on the car, then on the bounce crate to retrieve the gem.

Clear gem: Climb the staircase near the car, arriving at a balcony. Spin the soccer ball off to the right into the stack of Nitros at the end, revealing an Detonator Crate at the end. Set this off to blow up the Nitros back near the top of the stairs, clearing the way to collect the gem.

Green gem: Climb the middle staircase and jump off the side to the balcony halfway up the building. The green gem is right there.

Purple gem: Up the back of the courtyard, slide a soccer ball into a stack of Nitros by a tree, dropping down bounce crates. Bounce along the platforms of bounce crates to reach the gem.

Red gem: In the smaller courtyard, where the entrance to Classroom Chaos is, roll and slide the soccer ball into the stack of Nitros in the corner, activating the ! crate, causing a platform of steel crates to appear nearby. Activate the detonator crate on the other side of the doorway to clear the Nitros blocking the way, then bounce on the nearby bounce crates to retrieve the gem.

Yellow gem: On the rooftop that you reach after defeating Amberley, set off the detonator crate near the platform back down to the ground. Travel down on the platform, then slide a nearby soccer ball into a stack of nitro crates next to the front gate. This activates platforms of steel crates back over near the floating platform. Go back up the floating platform and jump along these to reach the gem. 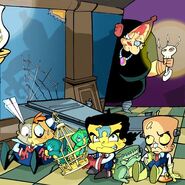 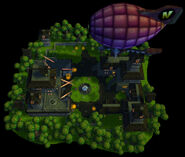 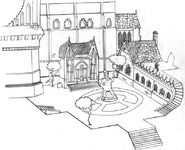 Concept art of the courtyard.

Concept art of a section of the school building. 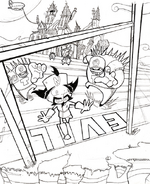 Concept art of a cut level in the academy, featuring Cortex chased by students in a football field. 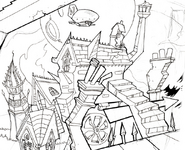 Concept art of the school's rooftop.

Concept art of a room in the school's interior.

Concept art of a dorm room in the academy.