A Hole in Space

A Hole in Space

A Hole in Space is the boss fight and final story level of Bermugula's Orbit and the twenty-seventh main level of Crash Bandicoot 4: It's About Time.

Crash, Coco, Cortex and Dingodile confront Nefarious Tropy and his female counterpart from another universe, with the latter having caught Tawna within her grasp. The N. Tropies send the two bandicoots to another dimension until Akano appears and guides them to a quantum rift where they must grind on rails that go on from one dimension to another. They must collect Bumpa Berries which cause them to hear voices of the past and use Lani-Loli's powers to collect some of the berries in time.

When they arrive back to Bergumula, they must reach the space station by through floating and fast moving platforms with the help of Akano and Kupuna-Wa while avoiding a laser beam sent by the N. Tropies. Finally, at the space station, the player, with help from Ika-Ika, must avoid energy balls and destroy power sources. After destroying some of the energy sources, The male N. Tropy later starts to chase the player, who still needs to destroy more power sources until the male N. Tropy suffers damage. Then, the player needs to do the same thing with the female N. Tropy to win the boss fight and then N. Tropies crash right into the Rift Generator.

After the N. Tropies' defeat, Dingodile does an oxtail to send them to another dimension. Kupuna-Wa and the other Quantum Masks reunite to close the rifts that the Rift Generator was opening. Then, the Quantum Masks and the others decide to celebrate their victory by going to Neon City to eat the best food in the galaxy. However, Neo Cortex is planning something.

A promo image of N. Tropy. 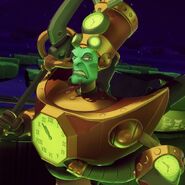 A promo image of N. Tropy. 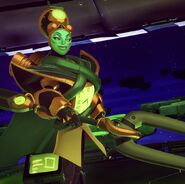 Concept art for the beginning of A Hole in Space.

Concept art of the ending cutscene to A Hole in Space.