The ? Crate is a type of crate in the Crash Bandicoot series, usually containing big amounts of Wumpa Fruit (or, occasionally, a 1-up or an Aku Aku mask, the latter mainly in the GBA series). Like other crates, it can be be destroyed by spinning, sliding through, belly flopping, or jumping on them. In Crash Bandicoot 2: Cortex Strikes Back and Crash Bandicoot: Warped, certain ? crates are programmed so that if the player dies many times in a certain segment of the level, it will turn into a checkpoint crate or mask crate which will stay there forever if the game is saved. They appear in Crash Team Racing, Crash Nitro Kart, and the Nitro-Fueled remake of Crash Team Racing holding items and in Crash Bash as purple holding special items in particular minigames. In Crash of the Titans for the Nintendo DS, they appear in large and small sizes. The larger crates can only be broken by using jacked titans.

The ? Crate also appears in Crash Team Racing Nitro-Fueled as an alternate skin for the Iron Checkpoint Crate.

"Who can say what's in these crates? You'll just have to find out for yourself."

"Who can say what's in these boxes? You'll just have to find out for yourself."

"A surprise in every box."

"You never know what you'll find - there's a surprise in every box."

"You never know what you'll find, there's a surprise in every box."

"Drive your kart through a weapons crate to break it apart and collect the power-up inside. These are marked with a question mask and usually come in sets of four."

"When broken, gives the player between 5 and 10 Wumpa." 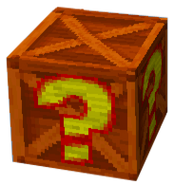 A ? Crate in Crash Bandicoot 2: Cortex Strikes Back.

A ? Crate in Crash Bandicoot for the 99X. 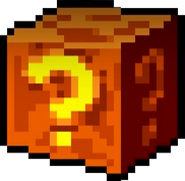 ? Crate icon in The Huge Adventure.

A ? Crate in Crash Nitro Kart. 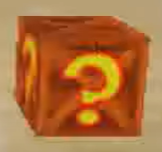 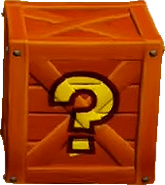 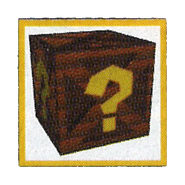 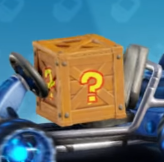