These boxes may cause something in the background to change.

! Crates, when struck, typically turn outline crates into other types of crates. Often, they form new iron crates, creating a bridge that allows the player to cross gaps, and/or regular crates containing Wumpa Fruit. Occasionally, they have other purposes, such as in The Lab, where they activate doors and platforms. With the exception of Crash Bandicoot: The Wrath of Cortex, ! crates don't count toward the box count as they are indestructible.

There are many variants of the ! crate. In many games, there is a green variant- the nitro switch crate, used to detonate all nitro crates in a level. In Crash Nitro Kart and the Nitro-Fueled remake of Crash Team Racing there is a wooden variant which activates traps after being broken. In Crash Bash, there is a purple variant found in many Pogo Pandemonium mini-games that turn a player's squares into points. This variation also appears in Crash Team Racing Nitro-Fueled as an alternate skin for the Iron Checkpoint Crate (albeit resembling a Basic Crate in that it appears to have a wooden texture). ! crates are also blue in the mobile version of Crash Twinsanity.

"Similar to the above entry, but these boxes may cause something in the background to change."

"These boxes may cause something to change somewhere on the level."

"Smack this box and something in the level changes."

"Hit these to turn on those silly Outline Boxes."

"Hit these to fill in the Outline Boxes."

"When landed on or spun, activates any outline crates linked to it." 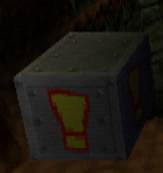 A ! crate from the Naughty Dog games. 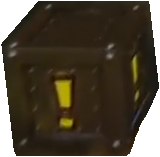 A ! crate from the Crash Bandicoot: N. Sane Trilogy.

A ! crate from the N. Sane Trilogy. 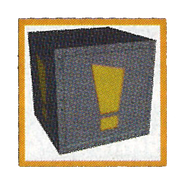 An wooden ! Crate from Crash Bandicoot: On the Run!. 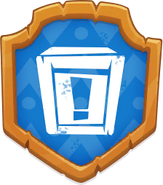 The crate team badge from On the Run!.